As Election Day in the States draws oh-so-near, I can only watch as a mere observer from a place far away. Of course, the lifemate nor I could have ever predicted that by staying here one more year, we’d essentially put the fate of our dear homeland into the hands of citizens who are genuinely interested in the punk-assed moron [Trump, so as not to be confused about whom I am talking] becoming the leader of the “Free World.” Ugh. That’s enough about that because I don’t really have any legs to stand on as an expat who left her homeland many years ago. Nevertheless, the sheer possibility that the punk-assed moron could even win sort of makes me feel really really sad. I could and probably should say more on the subject as far as it relates to my personal life, but I do not think that this is the most appropriate space in which to share these sorts of conflicts within the personal spheres of my life. I would embarrass myself through the vast hatred of my words, but I would necessarily scold the people with whom I have such personal beef. No matter … I shall refrain.

As far as other happenings from this past week are concerned, I successfully extended my visa, which means I can stay here in Seoul through November 2019. It was a stressful day because any time one visits an immigration office, s/he ought to be stressed; it’s a stressful situation. Luckily, I prepped and had all of the correct paperwork, and the entire situation resolved itself without a hitch. I’ve also been quite successful at sticking to this month’s Yoga Challenge, which is a nice break from my own laziness and overall disdain for “doing what I must.” The weather mellowed out a bit at the end of the week, so the lifemate and I got in two pretty great workouts outside over the weekend as well.

The lifemate and I spent most of last night hand-making invites for our little, A Saturday Night in November, party this coming weekend. 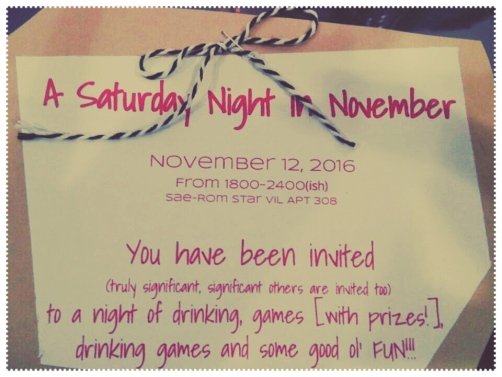 We basically invited his entire office, so that should be fun, if everyone actually attends! Ugh. Don’t get me wrong, I love the idea of throwing parties, but I don’t throw them very often [I can only think of about three or four times I’ve done so in my adult life]. As an introvert’s introvert, it generally takes me about a year to recover from all of the necessary social output hosting a party requires. Ugh. It’s alright though.

This particular party was my idea because my brother might be coming into town this weekend, and I get the general feeling that he [my brother] thinks that I don’t have any friends. So, I thought this might be a good time to actually do something more with him than the usual watching movies, eating out, &c., &c. The sad thing is that he might not actually make it this weekend. Something screwy went down with his credit card or something, so now he might not even be able to come visit … [sad face emoji]. The party must go on!, as it were.

I suppose that’s about it for today’s truly Mundane Monday Memoir entry. *sigh. For a final word about the whole “No-Writing November,” it’s sort of really nice but also, sort of really boring. I accidentally wrote a paragraph the other day when posting a pic to my photography site. So, I guess I’ve failed in some small sense. Other than that, though, I have to really stay cognizant of the fact that I cannot write anything of substantial length. And really, I shouldn’t be on the computer at all [except for today, of course]. *sigh. Oh well. I’ll try to do better this week. See you next Monday! Lates.

Drafts of the First Order